Published on May 26, 2015 | in Buddhist Rituals, Food, Spirituality, Tibetan Tradition By Jolma | 7 Comments

Culturally significant, nutritionally rich, and simply made with an ancient grain, barley, Tsamba (AKA Tsampa) has been a fast and honest food of Tibetan people for centuries. It is not only a predominant staple of our diet but is also used for Buddhist and mystical rituals.

The word “tsamba” refers to coarse ground roasted barley flour, similar to a coarse cornmeal, as well as the savory bite-sized tsampa meal this nutty flavored flour eventually becomes, with the help of a few key ingredients. The meal is then enjoyed, often for breakfast, in solid form or as Thuma (གཏོལ་མ, porridge). It’s an everyday food, especially in nomadic areas as much as it is a celebratory food for all: the educated and uneducated, herders, farmers, government officials, the wise and the young.

It is believed celebrating Tibetan rituals with tsampa flour predates the adoption of Buddhist beliefs in the region. Revelers toss it in the air to mark their joy at weddings, births, Losar (Tibetan New Year) and religious ceremonies; it is offered to animistic mountain gods and local deities for protection. It is also burned during the 49-days of mourning a loved one’s passing and long after to help release and carry the soul to hereafter.

Freshly ground or incorporated into Tibetan cakes (ཞུན), Tsampa is always a treasured gift to give and receive. In my hometown Regbong, it is often donated as part of honoring to celebrate ones’ life. Many Tibetans also believe that the grain even has medicinal uses. The flour is commonly applied to the gums to help relieve a toothache; it serves as massage oil for a headache or sore neck and elders munch on for a quick energy boost.

Tsamba is well ingrained in ancient lore and everyday life in my culture. It is even the name of a popular Tibetan typeface, as it reflects so profoundly our culture and its roots.

7 Responses to Tsamba: First Food of the Tibetans, Part 1 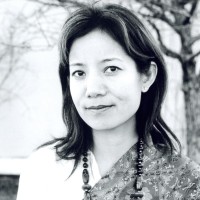